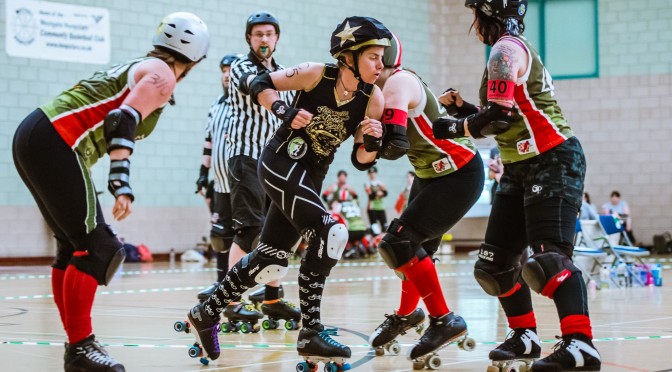 Wow, have we been busy the past couple of months. We apologise for not updating the website but we’ve barely had time to fit in going to our day jobs and sleeping. Almost.

Probably the most exciting thing that’s been going on, apart from a LOT of games, is that we have voted in our league co-captains for Spring-Winter 2014, and they are Lone Danger and Penny Bizarre! They will join Bucks Liz, Sven WillIBeFamous and Big Smack & Fries on our Board of Directors and will also lead our A team the Canny Belters for the rest of the year. Well done, ladies!

So, yes, we’ve been playing A LOT OF GAMES. You’ve probably heard though that we actually should have played another but it was cancelled due to rain on the track (no, seriously) – the Canny Belters sadly could not take on Glasgow’s Maiden Grrders at the Walker Activity Dome on May 10th, but as luck would have it Glasgow had a slot open in June so we’ll be heading up there to finally play them next week. Until the roof gets sorted at Walker Activity Dome, our home bouts are being played at the Centre for Sport – massive thank yous to Newcastle City Council for securing this for us.

How about those games then? This is how they all went down…

On April 5th the Belters went down to play Hot Wheel Roller Derby, and the lovely ladies from Yorkshire took the win 211-143. Three weeks later on April 26th, the Belters embarked on a mega coach journey down to Cardiff to take on the Tiger Bay Brawlers B-Bombs and came away with a 261-127 win. Luckily for the Whippin’ Hinnies the rain on May 10th didn’t make an appearance until their game had finished, just in time for Dundee Silvery Tayzers to take the win 163-131. Seemingly on a mission to play all of the teams in Scotland, the Hinnies first went to Stirling on May 17th and beat Fierce Valley’s Parma Violents 201-169, then headed across to Edinburgh on May 31st where they were beaten by ARRG’s Cannon Belles 221-105. Then it was the Canny Belters’ turn in the spotlight again, beating Birmingham Blitz Dames 171-142 at home on June 7th, and just this weekend gone on June 14th in one of the most exciting games in NRG’s history, they scored 147-124 over the mighty London Rockin’ Rollers!

And we’re not about to rest there either – in just over two weeks’ time on Saturday July 5th the Whippin’ Hinnies will be hosting Liverpool Roller Birds, after an mixed opener cherry popper game, featuring our newest recruits and the rising stars of Liverpool and other local leagues. Tickets will be available here for £6 very soon, keep those eyes peeled…