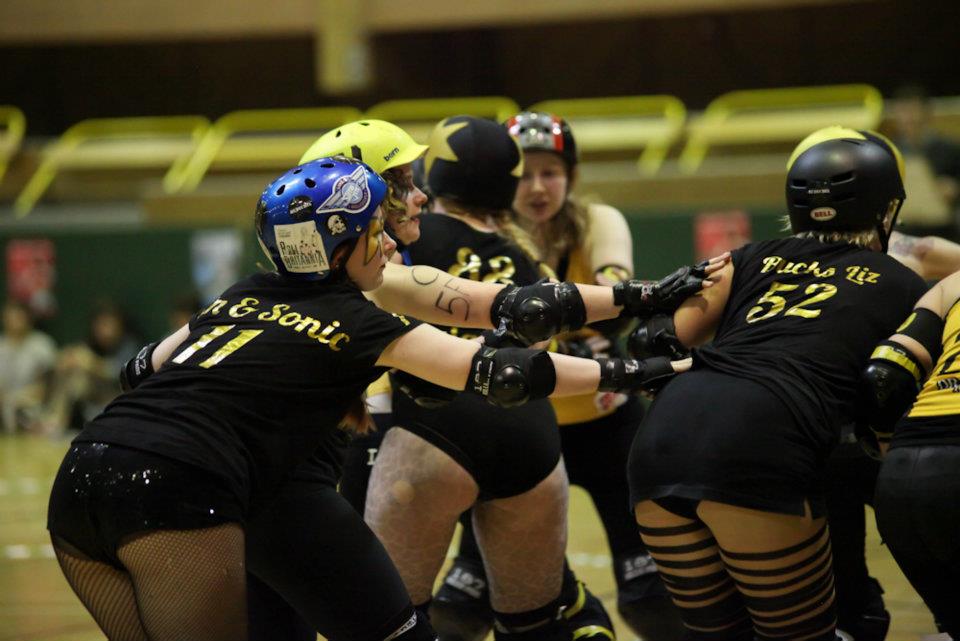 
The second bout of the afternoon of Daylight Slayings brought us a tantalising prospect as the Canny Belters took on the Maiden Grrders of Glasgow. The girls of Glasgow boast an impressive line-up which includes the well-known names of Sarah McMillan, The Very Hungry Splatterkiller and Rogue Runner, the Belters knew that this was going to be one of their biggest challenges so far, and we certainly weren’t left wanting for entertainment.

The first period of the bout saw the Belters come flying out the traps, as Miss Wired burst through a tough, slow-moving pack, going on to rack up 20 points from the off. However, the tone of the majority of the bout was set in very next jam, with Überschnell and Rogue Runner sharing a small amount of points, thanks to an extremely competitive pack. The first real threat of the impressive Sarah McMillan began in the sixth jam, where, despite again having to cope with a congested pack, she eventually managed to break into the lead and snatch five more points for Glasgow, making the score 29-12.

Things started to get a bit tasty by the eighth jam, with NRG realising the threat posed by McMillan, captain Brie Larceny stepped up to deliver an eight point jam. The lead up to her total saw Glasgow’s Moxie Blitz sent to the bin in the initial pack scramble, and a vital – not to mention huge – hit from Kalamity James on the Maiden’s jammer. NRG’s tactics proved solid as Glasgow introduced The Very Hungry Splatter Killer to the game, the Belters played a rare, very fast pack, causing a no-scoring jam, keeping the points at 40-12. Glasgow’s Fighting Torque was the next victim of NRG’s tactical awareness, when blocker Gin + Sonic checked the jammer to the very back of the pack, allowing Marie Bayonet to pick an extra four points for the home side.

A more physical element came into the match by the fifteenth jam, where, with the score at 56-16, NRG were determined to stamp their authority, where Glasgow were trying to push themselves back into the contest. It was also the first significant battle of many between the respective number sevens: Von Sleaze and McMillan. It was the latter who took advantage on this occasion, making the most of a powerjam, as well as Gin, Lone Danger and Kalamity being sent to the bin at different times, pulling the score back to 62-25.

One of the major talking points of the entire bout came to the fore in jam twenty, where confusion between lead jammers caused disruption for the Belters. The jam got off to a fiery start, with Missy Pow Pow seriously slowing Fighting Torque down, Miss Wired took lead jammer, racked up thirteen points, attempted to call the jam off, removing her helmet pantie, but all four whistles did not sound, therefore losing lead jammer status. Unfortunately for NRG, the confusion caused by the misunderstanding also allowed Torque to gain eleven points, and seriously put the pressure on the Belters.

Glasgow sought to take advantage, with Rogue Runner storming her way to a twenty point power jam. However, NRG did well in limiting her damage, as Brie, Gin and Bucks Liz defied the Glasgow outline to keep the jammer down to three passes, though the score ran up to 79-72. Yet again though, NRG bounced back, with the final jam of the period, Überschnell took advantage of McMillan being sent to the bin, circling the pack for her first two passes, before taking the outside with ease on her third, eventually bumping the score up to a healthy number for the home side once more.

As the second half began, NRG were weary of Glasgow’s record of making comebacks in bouts like these, and did well to hold off their opponents for the first two jams, grabbing five more points of their own. But with the re-introduction of Fighting Torque, came a resurgence from Glasgow, as despite being wiped out in a four-player pile-up at the start of the third jam, the jammer recovered magnificently to claim twenty points, ultimately being forced to call off the jam by the persistence of Kalamity; 111-95. The next eleven jams all saw NRG build a slow, steady lead on Glasgow, with Big Smack and Fries consistently preventing extra Maiden points and Kalamity’s jamming eventually pulling the score to 129-116.

However, the fifteenth jam saw the start of a truly remarkable turn around by Glasgow. The Maidens walled extremely well, disrupting the NRG blockers and allowing Torque to fly through, while Miss Wired was sent to the bin. And, with eleven minutes remaining, the Glasgow jamming stole a nineteen points effort, finally stopped by Bucks Liz; 129-135. This was quickly followed by a second impressive jam for Glasgow, with McMillan taking advantage of four of NRG’s line-up spending times in the bin, despite being slowed down by Kalamity and Bettie Basher, eventually pulling the Maidens further ahead at 129-153.

A tense few jams passed with neither team amassing more than eight points, meaning the final three jams saw the score at 137-162, and we were all set for a big finale. In the penultimate jam of the  bout, NRG poured all their effort in bringing the game to Glasgow, epitomised by Missy Pow Pow’s thunderous check on Jess E Ska, sending the jammer flying to the suicide seats. Überschnell took serious advantage and flew round the track to gloriously close the gap to 155-163.

With only one minute left, the final jam saw Kalamity and Rogue Runner facing off to ensure victory for their teams, but the Glasgow blockers reacted phenomenally to the pressure. Although the NRG jammer burst her way through, the pack was slowed and congested well, preventing either jammer from grabbing more than a point a piece, bringing a tense showdown to a climax.