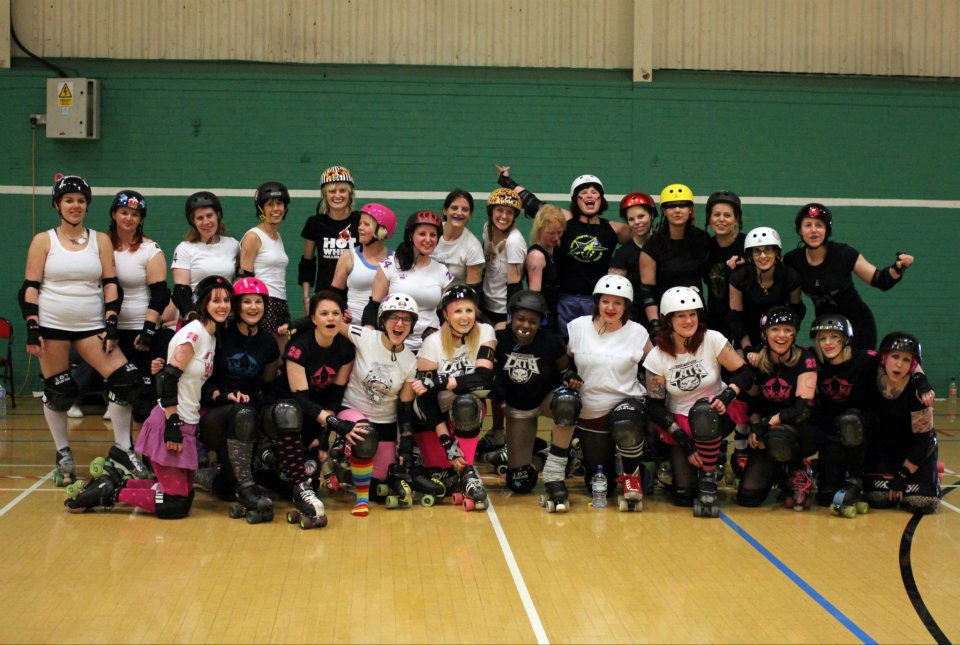 Read as our very own Rainbow Frite pops her cherry!

As Bad Reputation by Joan Jett begins to play and The Harsmallow’s skate out begins it’s easy to forget I only met my team an hour ago. It’s easy to forget my nerves and the six bottles of water I’ve already drank because my mouth is so dry from saying “is anybody else nervous?” all the time. They call my name and number and I wave to the crowd, not much taller than the girls crouched around me even with my arms in the air.

I’m not up until the second jam, giving me time to completely freak out as I sit on the bench with my team-mates. When the whistles signal the first jam is over I head for the track. I spend approximately ninety percent of that jam stunned, watching other girls throwing hits and booty blocking like they’ve done this every day of their lives since birth. In reality both teams are equally matched but I feel like the odd one out.

Back at the bench Princess Crotchammer from  says to our line-up manager, “Rainbow is a great jammer!” I should probably be flattered but my heart sinks in absolute terror and I’m a little bit sick in my mouth. There’s a feeling that I’m sure doesn’t go away with experience – that moment when you’re on the jammer line and the ref calls “five seconds.” The pack starts rolling and everything fades away. The jammer whistle blows and I take off.

After that I’m fielded as jammer every time I’m on the track and I get more and more confident. I try not to look at the score, convinced that if I find out we are winning I might relax and if we are losing I might panic.

Our opposition, The Smackjacks, have some hard hitters – particularly Dee Tsar Star of the Wakey Wheeled Cats – and they’re relentless. Every time I get knocked down I bounce back up. Or, at least, almost every time.

There’s not long left on the clock, this is the last jam. As I plant my toe stopper on the  line the opposing jammer, Magic Beanz, shoulder checks me across the line. I panic as the ref blows his whistle, fearing a false start penalty, but he sends her to the sin bin for contact before the whistle.

It’s a power jam to The Harshmallows. We can win this, I just need to push myself. When the jammer whistle blows I break my way through the pack, twisting my ankle awkwardly. I need to keep going, to just score some more points and close the gap but it hurts. I call it off and stagger over to my bench as the ending whistle blows.

The cherry popper bout is over and my cherry has most definitely been popped. I limp around to hug everybody and I can’t stop smiling. The final score was Blackjacks 102 – Harshmallows 82 and I may run the risk of sounding cliché but it really didn’t matter who won, it was always about the experience. And besides, we didn’t lose – we came second!