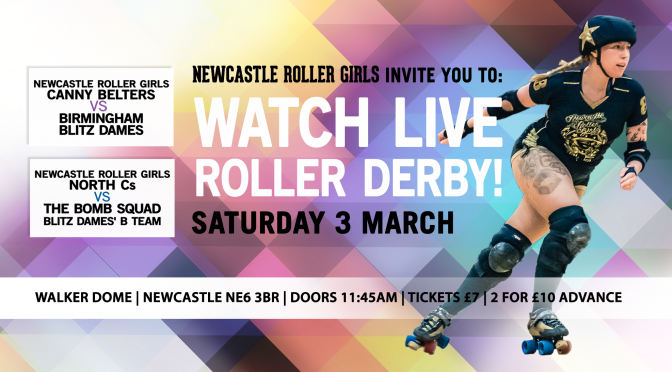 Our first home game of 2018 is an exciting double header! On Saturday 3 March the Canny Belters take on Birmingham Blitz Dames, and the North Cs play Birmingham’s B team, the Bomb Squad.

The last time our Canny Belters played Birmingham Blitz Dames was back in 2015, when the Geordies took the win 213 – 95. But the Brummies have been on a winning streak since then, moving steadily up the rankings. And both teams had success in the USA last year,  with Birmingham finishing the year ranked 6 in the UK and 85 in the WFTDA worldwide rankings. Newcastle are currently ranked 2 in the UK, and 90 in the WFTDA.  Both teams will be fighting for rankings points in this WFTDA sanctioned game so expect a nail biter!

Our North Cs face Birmingham’s Bomb Squad for the first time. The visiting team is ranked 275 in Europe while Newcastle’s newly established C team is at 407, so the home team will be looking to come away with a score differential that means they can climb the rankings.