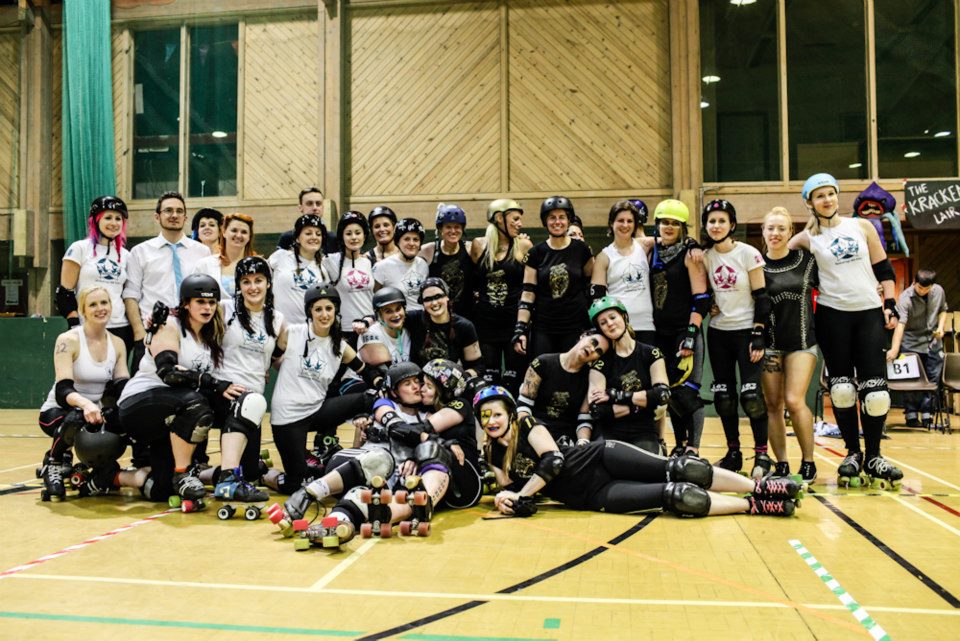 After an appetite whetting bout between the respective ‘B’ teams finished merely minutes earlier, Saturday afternoon was just too kind to the final crowd of roller derby spectators to fill the Walker Activity Dome for the next few months, the it was then the turn of the ‘A’ teams. There are connections galore between Newcastle Roller Girls and Middlesbrough Milk Rollers, with founding members of each league, former members of the leagues and simple places of living being swapped between the two in numerous cases. Yep, it’s fair to say these two are close and friendly rivals, which in roller derby, means that entertainment was afoot.

Much like the earlier game, it was the visitors who started in the ascendancy, trudging out a lead in the first four jams. The work of jammers Rocky Ell Boa and Lolly Go-Sprightly helped build up a steady 17 point lead, with the hosts unable to register any reply, thanks in particular to the strong blocking of Moose and The Little Grr-Maid; 0-17.

However, unlike the response of the Hinnies in the first bout, the Belters succumbed to a display of seriously impressive jamming at the hands of Terri Sudron. Despite the best efforts of Bucks Liz in slowing the jammer down, Sudron eventually squirmed her way beyond the clutches of the blocker, before brilliantly jumping between the enclosing GG Fox and Elasta Plasta. All the while, Middlesbrough blockers Little Grr-Maid, Swede Dreams and Moose denied NRG jammer Gin + Sonic any chance of making any progress for the home team; 0-35.

The Belters didn’t have to wait much longer for their first point of the day, as it arrived in the very next jam. Although Rocky Ell Boa took an early lead, she was immediately trapped by the Newcastle blockers, which eventually allowed jammer Big Smack & Fries to slip through, scoring a single point before the jam was called off; 1-35.

Things didn’t get any better for the home team in the following three jams, as a tremendous team effort by MMR pushed their total up to 48 by the start of the tenth jam. And it was in that jam that a serious blow was struck by the visitors, as Terri Sudron surged to a quick lead through the pack, as her blockers Gunpowder Dot, Moose and Frodo Bashins ensnared Big Smack very well, ultimately causing the NRG blocker to be binned. A series of good passes was highlighted by Moose smashing her way into the middle of the Newcastle wall, allowing Sudron to duck her way through to boost the score to 1-73.

The following jam saw MMR take full advantage of some Newcastle misfortune. Not only did Big Smack start the jam in the bin, but a collision between Missy Pow Pow and Miss Wired meant that Rocky Ell Boa was able to push through the pack to rack up another 9 points for her team. For the next four jams the visitors steadily increased their total, with the only reply coming through GG Fox in the thirteenth jam, the NRG jammer making use of the solid blocking of Bear and Gin + Sonic to pick up 3 points for the hosts; 4-86. Unfortunately, the end of the fifteenth jam saw ref Pandaora Monium take a nasty fall which left her needing medical attention on her leg, and she was eventually taken to hospital. We all wish her a speedy recovery!

A switch up in tactics from the home side in the sixteenth jam saw a mild improvement in the fortunes. Although captain Brie Larceny started as jammer, she immediately passed the star panty to GG Fox, and whilst Rocky Ell Boa still took lead status, the Newcastle jammer collected 10 points for her team. However, GG Fox called the jam off, drawing the whistles of the refs, despite not being lead, meaning she was start the following jam in the bin. This seemed to spur the Middlesbrough players on, as a tremendous piece of jamming from Rocky Ell Boa meant the visitors broke the 100 point mark; 14-102.

The six following jams saw the bout become a bit of a tighter affair, with the visitors seemingly willing to shut out their opponents in the final few minutes of the first half. However, MMR didn’t have it all their own way, as the determined work of Brie Larceny, Bear, Missy Pow Pow and Lone Danger limited their points total to 15 in that period. The introduction of NRG’s Guinefear of Jamelot proved a boost for the home team, yet her haul was stopped at 4 as she was crunched to the floor by a big Moose block. By the end of the twenty-third jam, the scores were set at 21-117.

Once more the Middlesbrough team closed their opponents out for the final two jams of the half, deploying a tough battling set of blockers to strengthen their defences. This coupled by the dashing efforts of Frodo Bashins and Terri Sudron meant that MMR lead the home team by over 100 points at half time.

There seemed to be a hunger ignited in the Newcastle team by the start of the second half, and it only took until the third jam for this to produce some results. Brie Larceny offered a captain’s performance as jammer, forcing her way past formidable pair Moose and Little Grr-Maid, and aided by the wrecking ball blocking of Levine Dead, Lone Danger, Missy Pow Pow and Elasta Plasta, smashing a path clear for the determined Newcastle captain; 35-129.

By the sixth jam, it seemed that the Middlesbrough players were content to let the clock run down whilst tiring and shutting their opponents out. Here, Rocky Ell Boa sped to lead, only to sit back and hold off her opposing jammer Guinefear of Jamelot, slowly circling most of the track and only calling it off when her NRG equivalent final squeezed past. This was a tactic that would be utilised repeatedly until the end of the eleventh jam, frustrating the home team at 39-146.

But it would appear that the tricky Rocky Ell Boa was more interesting in turning the screw on the Belters, as she turned in yet another showstopping display of jamming in the twelfth jam. First she survived an enormous hit from Bear before just about shrugging off the close attentions of Elasta Plasta to make a successful first pass. The MMR jammer did well to weave her way a collision between Bear and Lone Danger before Moose smashed NRG’s Guinefear of Jamelot off the track, completing a devastating blow from the visitors; 39-165.

The Newcastle players attempted to restore some pride in the thirteenth jam – everything seems to happen in the thirteenth jam in NRG bouts! Miss Wired, Brie Larceny, Missy Pow Pow and GG Fox set upon jammer Ru Bella from the second the jam started, whilst Big Smack forced her way through Frodo Bashins and Terri Sudron. A massive cheer from the home crowd seemed to spur the NRG jammer on as she swiftly made her way to 15 points; 54-170.

That however, seemed only to tighten the Middlesbrough defences, and the only scoring for the next three jams was done by the visitors. That was, until, Marie Bayonet made an appearance as jammer for the Belters. She squeezed her way beyond Little Grr-maid and made the most of opposite jammer Lolly Go-Sprightly being sent to the bin, jumping ahead of the pack early on. Missy Pow Pow and GG Fox combined to break a hole in the MMR wall as Bayonet made use of a successful outside line; 72-178.

Another mammoth effort from the home team came in the nineteenth jam, with pride slowly being reclaimed. Guinefear of Jamelot took a fantastic early lead and somehow kept up with and overtook an exceptionally fast pack, surviving hits from Little Grr-Maid and Gunpowder Dot in the process. Miss Wired then wiped jammer Rocky Ell Boa off the track to limit her scoring to 3, whilst Missy Pow Pow held Gunpowder Dot at bay for a final pass from Guinefear, very good jamming; 88-181.

With one minute left on the clock, the final jam was an atmospheric one. Miss Wired shot through the pack to tumultuous applause from the home crowd, and proceeded to battle it out with opposite jammer Lolly Go-Sprightly, a battle which was maintained for a whole lap, until Terri Sudron and Gunpowder Dot finally caught up to hold the NRG jammer back, bringing the bout to a close.