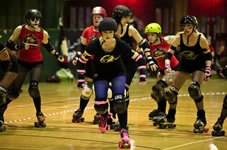 We took on GCRG, a team similar to us, a team that we would have to work damn hard to beat, and a team that we knew wouldn’t give us an easy home win (even if we asked them REALLY nicely). The GCRG girls wore red, and wore lots of face paint. NRG wore black and lots of sparkly gold.

In the first half it was anyone’s game, pretty much neck and neck right through, Clinically Wasted earned her certificate for the Best Jammer for GCRG within the first few jams, and for NRG Marie Bayonet quickly became the crowd favourite.

The second half saw both teams really fight for that lead, GCRG were hitting harder, dodging, and getting lead jammer, and NRG upped their defence, leaving their jammers to fight for their points as the NRG girls built walls and held back the GCRG jammers as best they could. Half way through the second half the point gap started to stretch, when finally it reached the 50 point win for NRG.

So, that’s it!
We successfully put on our first home bout, and it’s fired us up for the rest of the year!

We’d like to say thank you to everyone who made the bout a success, our sponsors, the media, Frayed Knot for the half time entertainment, and to everyone who bought tickets and made the day as brilliant as it was.