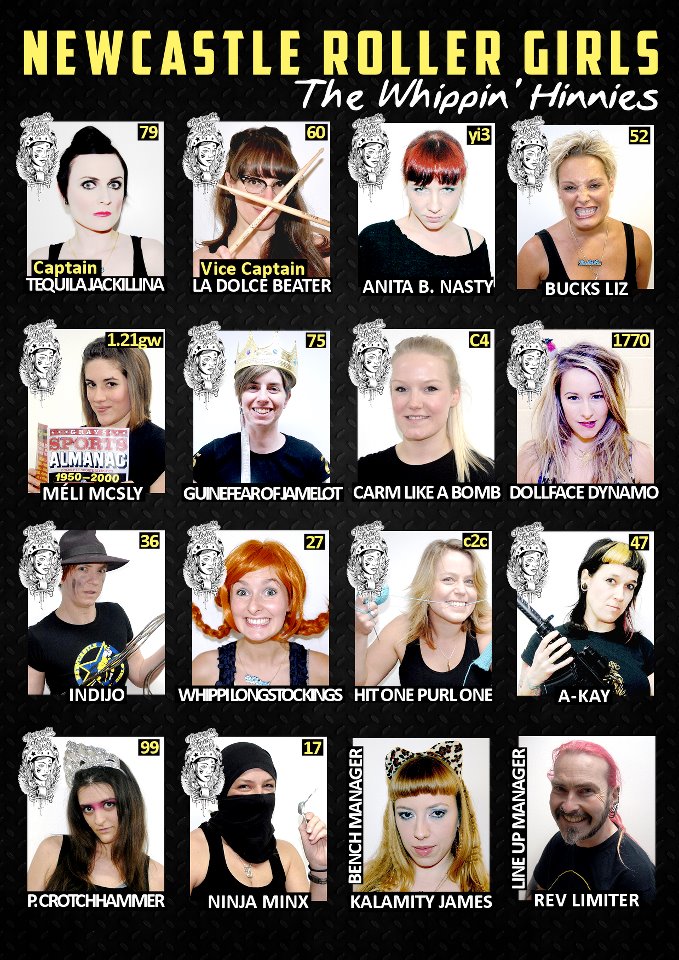 The first of an April double-header day of action at the Walker Activity Dome, home of Newcastle roller derby, saw the home side’s Whippin’ Hinnies take on the Hulls Angels Roller Dames. Following an impressive performance in their last bout, the Hinnies were looking to build a sturdy foundation for their still relatively mixed experience group. Nothing could be further from the truth for the visitors, however, as this would be the first competitive bout Hulls Angels have played, this would be a true test of teamwork for the newly-formed outfit.

The first period got off to a steady start by the visitors, with Hull jammers MIA and Iron Giant racking up 17 points between them, as Hinnie Guinefear of Jamelot snatched 5 back. It could have been an even better start for Iron Giant, who was only limited to 10 points due to a fantastic block by Méli McSly, sending her to the back of the pack. The third jam came and introduced Hulls Eva Mean and NRG’s Anita B. Nasty, who took 7 points each, whilst the fourth saw some efficient wall-work from the visitors, tangling Tequila JacKILLina in the pack, and allowing Peggy Pistols to add up an extra 5 to their score, bringing the total to 12-29.

Cue a piece of dramatic brilliance from the home team. Guinefear returned to the track in the sixth jam to battle through an extremely congested pack, at which time Iron Giant was sent off. NRG set about outside lining, and Guinefear duly responded by easing her way round for a massive 22 point jam. The bout now meant business. Big points were hard to come by for the next few minutes, but by the eighth jam, Peggy Pistols had tipped the score in Hulls favour at 38-40, and would have made it more, had it not been for the organisation of a two-strong wall of vice-captain La Dolce Beater and McSly, which would become something of a theme for the bout. The visitors totted up a further four points in the next two jams, but a great burst through the pack by Dollface Dynamo, who shrugged off the attempts of Hulls Siege Ya Later, to pull the score close again at 42-44 by the tenth jam.

But of course, once more, things don’t go by uninterestingly for the Newcastle Roller Girls, and the eleventh jam certainly proved that. Jammer Anita B. Nasty looked to have been forced to the back of the pack, and her opposite Iron Giant was inches from taking lead jammer until a fantastic block from McSly sent her sprawling, and allowed Anita to surge through. Both jammers made several successful passes until La Dolce Beater stepping in to once more halt Iron Giant, simultaneously making a path for Anita to fly through for a very good lap; an amazing jam, bringing the score to 63-54.

Things didn’t slow down there either, as the twelfth, and final jam of the first period offered a showdown between Guinefear and Peggy Pistols. Again both jammers picked up points, before Peggy was sent to the bin, making life easier for Guinefear, who took advantage of the power jam, particularly as Hulls Fleur Rocious was also sent off, grabbing a further 13 points for the home team.

The second period started much in the same way as the first, with Hulls Angels taking the ascendancy. A ten point jam by Iron Giant was swiftly followed by a further four from Peggy Pistols, who had a particularly brilliant break through the pack at the start of the second jam. However, for all their pushing, Hull were not quite able to draw level with the Hinnies, though getting as close as 77-72, where MIA was unlucky to have cut track and hand the lead status to Dollface Dynamo.

A five point gap was evidently not what the homeside had wanted, as the fifth jam gave us a display of sheer graft and determination. Indijo fought her way through the first starting pack of the entire game, taking lead just before Peggy Pistols was sent to the bin. The NRG outside line worked very well once more, allowing Indijo to add 15 points to their total before she too was sent off for a backblock on Siege Ya Later. But the action still was not over yet, as the very next jam saw Eva Mean burst through the pack, grab a few points but then get sent off for a back block on La Dolce Beater. Almost immediately, Indijo was allowed back onto the track, blazed through an unsettled Hull wall and add an extra 18 points to the cause; 110-81.

The next five jams were a much tighter affair, with neither team adding more than 13 to their total, thanks particularly to the work of pivots Tequila and Dr. Blockson. But tension started to creep into the bout at the thirteenth jam, as Dollface Dynamo was immediately sent to the floor, letting Iron Giant take the lead and making a good first pass. However, another great block from McSly meant she was prevented causing further damage, and even gave Dollface the chance to grab a few more points to boost the total to 130-105.

The final two jams were the result of tremendous hard work from the Newcastle blockers, particularly Tequila, A-Kay, McSly and La Dolce Beater, all of whom surrounded and slowed both Eva Mean and MIA down to near ineffectual levels. Only 11 more points went to the visitors, while Guinefear and Carm Like A Bomb ensured a tough-fought victory with 4 points each.