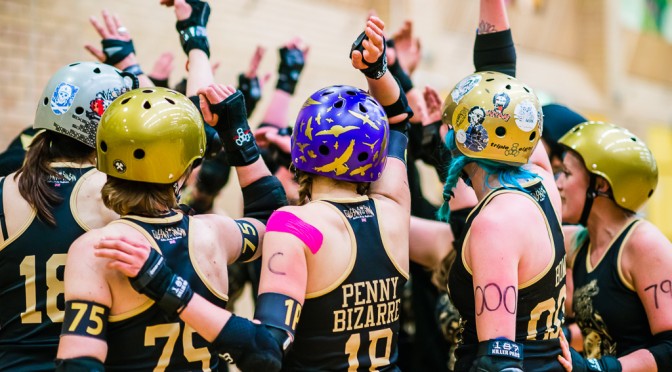 After a nail biting first half, Newcastle Roller Girls took the win against Leeds Roller Dolls last weekend. The final score was 195 to 127, a convincing victory which saw Newcastle beating the odds t

o regain the top spot in their group in the 2015 British Championships.

Head Coach Kerri James said, “The last time we played Leeds Roller Dolls was in the 2014 Northern Series last September when they beat us by a big points differential. Since then, we’ve been training hard – working on our team strategy and strength – and we were confident going into Sunday’s bout that we could come out on top, even though the stats showed that Leeds were predicted to win. We’re in a strong position as we go into our first European tournament, and this win puts us back at the top of our divisional table and in a really great place for getting the playoffs later this year and promotion to the premier league.”

The victory sees Newcastle move from 20 to 14 in the European rankings and up to 5th place in the UK, just one place lower than fellow North East team Middlesbrough Milk Rollers. Coincidentally, MMR will be the first team Newcastle play when they travel to SKOD – A Skate Odyssey for the first time later this month. The three day event (15-17 May 2015) sees top ranked European teams battle it out for the top spot in a knock out tournament held in Gent, Belgium. Teams include Paris, Copenhagen, Nantes and Dublin. Marie Roberts (aka Missy Pow Pow) said, “We’ve been keen to play at SKOD for some time now, and for me personally it’s been one of my derby ambitions since I started playing roller derby four years ago. It’s going to be tough as we’ll be up against some really strong teams, but we’re in really good shape and we’re going to give it our best shot.”

Our next home bout is against Brussels on Saturday 30 May at the Walker Dome in Newcastle – more info & tickets coming soon!