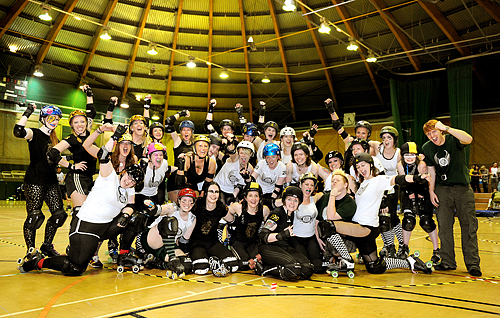 Summer 2012, the BBC, ITV, Sky, Fox, ESPN and every other TV network going has been looking forward to it for a couple of years now. Of course, there was the European Football Championships, Wimbledon, the Paralympics and Olympics in London, but the one we all knew you were really looking forward to didn’t take place in Ukraine or Poland; didn’t happen on a grass court or a velodrome. No, we were all waiting for the track to be taped up at the Walker Activity Dome in Newcastle as the Canny Belters welcomed the Checker Broads of Manchester to the Rollympic
Games. These two leagues are already known as examples of experienced professionalism in the world of British roller derby, and have met each other before, and certainly have never left the crowds wanting at the culmination of their encounter. Yes, we were going to be in for a treat, which was only to be soured by the news that Canny Belters vice captain Von Sleaze would be missing
the action due to an injury.

The bout started at a rapid pace, as Vic Tori Bee tore through an extremely crowded pack to take lead and nine early points before calling the jam off, a clear statement of
intent from the visitors. The second jam saw the first of a truly mouth-watering battle between NRG’s Kalamity James and MRD’s Psycho-sis, it was the NRG jammer who drew first blood, bulldozing her way beyond the Manchester blocker to take lead, with Pyscho-sis eventually being sent to the bin. However, despite a great inside pass, Kalamity was also sent to the bin.
Visiting jammer Scary Wollstonecraft was allowed to make a solid pass after Sirenide wiped out three of the Belters blockers, although both Manchester blocker and jammer were ultimately binned as well; 1-14.

The Belters surged straight back into the bout with the very next jam, however, as Miss Wired was introduced to the contest. With Scary Wollstonecraft starting in the bin, the Belters jammer looked to make the most of a powerjam, though things didn’t start easily as she was hit with a huge block from Pinky Fingaz which sent the blocker to the bin. But this merely delayed Miss Wired ‘s attack, as she managed to ease her way through the Manchester blockers, rallying the crowd as she brought 15 points back to the hosts; 16-14.

Upon the arrival of the fifth jam saw something the visitors may not have been expecting, as usual blocker and pivot Big Smack & Fries took the jammer panty. The jammer certainly used her blocking experience to help her here, as not only did she brilliantly take lead and make an easy first past, but also sent Sirenide sprawling with a big hit when the blocker moving in to challenge her. Captain Brie Larceny and Gin + Sonic caused havoc in the Manchester ranks, both keeping Penny Pinch’er trapped and confusing the Checker Broad blockers in the proces. A great jam which
boosted the scores to 35-14.

Manchester looked to regain a hold on the game over the following five jams, and conceded only four more points over that period, whilst the work of Sirenide and Scary Wollstonecraft meant that they cut the NRG lead to 39-23. But the bout burst back into life in the eleventh jam, as NRG jammer Miss Wired started in the bin (alongside opposing captains Brie Larceny and Manc Zappa), Vic Tori Bee sought to cause some powerjam damage to the hometeam. However, things didn’t go too smoothly for the Manchester jammer, as she was held off by Kalamity James and Missy Pow Pow, and ended up cutting track, and being sent to the bin herself. Things got a little confused though, as the newly released Miss Wired ended up straight back in the bin moments after returning. But, when both jammers were finally back on the track, we were treated to some brilliant dodging from Miss Wired, before the weaving of Vic Tori Bee created some serious problems for the NRG blockers to deal with; 54-37.

A further powerjam followed in the twelfth jam, as Vic Tori Bee started in the bin, giving Kalamity James the chance for big points. The Belters jammer did well to avoid the efforts of Sissy Breakneck and racked up another 11 points. Guinefear Of Jamelot, making her first appearance for the Canny Belters, then added another 3 points, with a helping hand from the big hitting of Missy Pow Pow on Penny Pinch’er. The game looked in danger of slipping from Manchester until Vic Tori Bee supplied a much needed 7 points boost in the fifteenth jam, bringing the scores to 68-48.

Again though, the Belters turned on the pressure in the sixteenth jam. Kalamity James burst through the pack, but was sent off without taking lead, and was quickly followed by Gin + Sonic and Jowanna Clout in a meaty contest. Sniper Viper did very well to hold Scary Wollstonecraft back, but was also eventually sent off. Then, upon her return to the track, Kalamity immediately surged through the pack, and gathered a huge 19 points to Wollstonecraft’s 5. Things seemed to be getting better for NRG in the following jam, as despite Manc Zappa taking a great lead in a powerjam situation, Sniper Viper stepped up to provide a block of enormous proportions, preventing any more than 4 points being conceded; 87-57.

Of course though, Manchester are a team not to concede defeat. They flew straight back into contention in the eighteenth jam, as the excellent Vic Tori Bee somehow managed to squeeze her way through a Bucks Liz and Big Smack & Fries to claim a vital 17 points for her team. With the scores close at 95-74, the Belters looked to shut the first half in a comfortable manner. Guinefear Of Jamelot flew through the pack for an early lead, but was immediately stopped by a huge block from Psycho-sis. Unfortunately, Manchester jammer Manc Zappa required medical attention at the end of the jam, following a nasty fall – thankfully she was able to continue. The final jam of the half saw NRG frustrated, as they were unable to prevent Scary Wollstonecraft picking up a further 4 points for the visitors, but all-in-all, this was an extremely impressive performance from the Canny Belters.

The Belters began the second half in the same manner as they had performed in the first, denying the visitors any points for the first four jams, whilst they broke the 100 point barrier. Great efforts from Big Smack & Fries and Kalamity James in particular bumped the total up to 116-79.

By the sixth jam, however, it appeared that Manchester had thrown themselves even more into the bout. The patience of Vic Tori Bee payed off as she hovered around the back of the pack before her opposite Big Smack was sent off alongside Gin + Sonic, the Manchester jammer promptly forced her way through the pack to grab lead. Despite the disruption to the Manchester wall by Missy Pow Pow, no NRG blocker could halt a great jamming effort from Vic Tori Bee, who reigned in a 15 point haul; 116-98.

The bout stayed a very tight, tense affair for the following four jams, with the home side adding only 4 to their total, whilst their counterparts similarly added only 8 themselves. But the turning point of the entire game came in the eleventh jam, with 15 minutes remaining. The first jam of the half from Scary Wollstonecraft saw her create enormous problems for the Belters, and, although she was denied lead status (no lead given to either jammers) by yet another huge Sniper Viper block, she made a series of impressive passes, surviving big hits from Big Smack  Missy Pow Pow and Sniper Viper again to pull the scores level at 120-120.

NRG reclaimed a narrow lead in the following three jams, pushing their noses in front at 128-122, but we were certainly aware that we had a serious contest on our hands
from this point on. Manchester first turned the heat on the hosts in the fifteenth jam, as Vic Tori Bee took to the track again. With jammer Kalamity James and Bucks Liz starting the jam in the bin, the Manchester jammer put in some seriously rapid passes, holding off the challenges of Bear, Missy Pow Pow and Brie Larceny in what was a truly fantastic jam; 128-147.

This seemed to spark a fighting spirit into the Canny Belters once more, as a series of big blocks came in from the NRG blockers. Gin + Sonic and Pinky Fingaz ended up being sent to the bin as Scary Wollstonecraft crept through the battling pack to boost the visiting total by 9 points. The jam was called off just before an enormous hit by Bear sent the Manchester jammer hurtling into the crowd, resulting the the NRG blocker being sent to the bin.

Jam 18 embodied the battling side of both teams, as they strived to snatch the victory from each other. Despite Gin + Sonic and Bear starting in the bin, Miss Wired took a great lead, only to be immediately sent to the bin herself. In the ensuing battle to prevent Scary Wollstonecraft grabbing major points, both Brie Larceny and the jammer herself were also sent to the bin. Finally, with Bear and Miss Wired back on the track, the pair linked well, with the blocker slamming Kerried Alive out of her jammer’s path, before the NRG blockers took up an outside line, allowing a great jamming performance; 144-166.

With 4 minutes remaining, things began to get extremely tense, as the visitors held a 22 point lead over their hosts. Cue another impressive jamming session from Big Smack & Fries, who battled through the pack to make yet more successful passes, as the formidable Missy Pow Pow dealt with the danger of Vic Tori Bee; 153-166. The Belters could smell blood now, and, with only 2 and a half minutes on the clock, the twentieth and penultimate jam saw Bear force her way through them pack fantastically, picking up a further four points for her team, however, the Checker Broads cleverly sped their pack up, preventing the NRG jammer from claiming any more ground on them; 157-166.

And so the final jam was upon us, only 90 seconds of game time left, and only 9 points separating the two teams, the tension was palpable in the Dome. Both Kalamity James and Missy Pow Pow started the jam in the bin, but the Manchester blockers spread themselves as thin as possible, killing off almost 70 seconds before either jammer could be released. An enormous release in tension exploded as Miss Wired finally broke through for the lead, with Gin + Sonic holding opposing jammer Scary Wollstonecraft at bay, and Pinky Fingaz being sent to the bin after a battle with the NRG jammer. A dramatic jam and bout was called to a close with skaters, audience and even announcers left hanging in the balance, eager to find out who had come out on top of what was a truly stunning
encounter.

Finally, after much debate, the scoreboard showed that it was Manchester Roller Derby who had squeezed a narrow victory at 157-172, and despite the natural disappointment felt by the home side, neither they nor the crowd could leave feeling they hadn’t given it their all in a sensational bout between two very good sides. An extremely entertaining and tense bout all round.