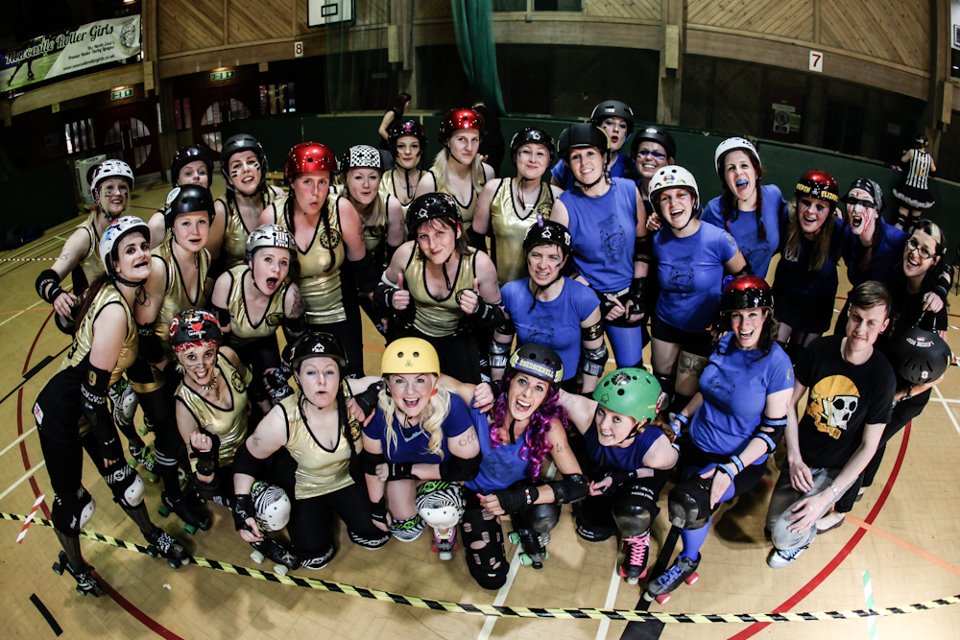 As summer begins to bring itself to an obviously unexpected rainy conclusion, the derby loving masses of Newcastle and Kent descended upon the Walker Activity Dome in search of something a little more cheery and exciting than the occasional flood. And what better way to do it than to catch the Whippin’ Hinnies taking on the Kent Roller Girls in the first of two bouts of the Newcastle Roller Girls hosted Rollympic Games? The first half of the year has been an extremely productive one for the Hinnies, with an impressive amount of fresh faces becoming staples of their line-up, however, due to the injuries of Cherry Vaudevillain, Dollface Dynamo and N.C. Hammer, their numbers were depleted to just twelve, once the experienced head of BoozeWound Barbie was added to their ranks. Kent Roller Girls are a fairly newly established league, first arriving in 2010, but with a good record in their bouts to date, losing just once prior to their visit to the North East.

As would be expected, being two skaters down, the Hinnies took a cautious yet confident start to the bout, as Hot Whips and Uberschnell clocked up two points each in the first two jams, with the NRG wall holding the Kent jammers back for a steady 4-0. The third jam gave the audience a taste of some jammer-on-jammer action as Marie Bayonet and Faery Quad Mother jostled through an extremely fast pack, the visiting jammer taking lead only to take a solitary point as her counterpart added a further three to the home total.

The cageyness lasted for a further six jams, thanks largely to some extremely stubborn blocking from both sides. First, just as jammer Mayjour Collision though she’d broken through for lead, she was cleaned out of contention superbly by Hinnies captain La Dolce Beater. The following jam saw the tables turned, as Hot Whips was the target of an enormous collision at the hands of Elsie Dagger, which saw the Kent skater sent to the bin, but denied Hot Whips the opportunity for more points. By the ninth jam, despite determined work from Elizadeath Benhurt and Indijo, an eager Whizz Skid forced her way through to tally up a three more points, closing the gap to 13-10.

But, in what has become something of an unofficial trademark of a Hinnies bout, this merely served as a springboard for the homeside offensive. The tenth jam saw Penny Bizarre face off against Mayjour Collision, and it was the Kent jammer who grabbed the lead, as well as a four point haul, however, Penny was able to survive a series of meaty challenges, patiently keeping the pressure on her opposite number. It finally paid off when a huge pile up of skaters saw Mayjour Collision unsuccessfully attempt to call off the jam, and instead ended up being sent to the bin. Penny Bizarre took full advantage, making a couple of fleeting passes, aided by the disrupting work of Levine Dead to the Kent blockers, ultimately taking the total to 33-14. The scores stayed very much the same for the following two jams, but, with the arrival of the thirteenth outing, things got a little tastier.

With barely five minutes left in the first half, Penny Bizarre and Faery Quad Mother lined up for battle once more. The determination of the Kent blockers to limit scoring before the break meant that Penny Bizarre was held up in the pack as Faery Quad Mother eased around the outside for the lead, and she did extremely well to add another eight points to the visiting total, however, she was ultimately sent to the bin battling through a congested pack. Again Penny made sure to take advantage and, finally escaping the attentions of Elsie Dagger and Marty McSuperfly, managed to grab ten points of her own, bringing the scores to 48-25.

The final jam of the half was equally as important to the home team, who looked to take command, with Kent’s jammer starting in the bin. However, Hinnies jammer Hot Whips was herself sent to the bin before she could claim the lead, allowing Faery Quad Mother to be released early. Despite the hard work of Hit One Purl One and La Dolce Beater, the Kent jammer broke through to snatch at five points, before eventually being sent back to the bin for a backblock. The return of Hot Whips proved pivotal for the Hinnies, and with the help of Indijo breaking the Kent wall, the home jammer scored an impressive fifteen point jam, bringing the first half to a close.

With Faery Quad Mother starting the first jam of the second half, the Hinnies looked to continue building on their previous performance. Uberschnell managed just that with a seven point total in the first jam. But things began to get a little more cagey again in the second jam, as Whizz Skid grabbed the lead and was only denied a greater total of a solitary point by the blocking of Rainbow Frite. The third jam saw Marie Bayonet push the home total up to 70 points, but the efforts of Diagnosis Maul’er, brining in 3 points of her own meant that Hinnies blockers Blackjack Belle, Elizadeath Benhurt and Hit One Purl One had to keep focus in slowing the pack down, something which was repeated for the following two jams, as the scores stayed at 70-34.

It wasn’t until the tenth jam of the second half that a great improvement on either total was reached, and this time it was the visitors who took initiative. With the scores at 76-36, and time beginning to run down, it was Faery Quad Mother who again took the jammer panty and forced her way through pack for an early lead. The Kent blockers then employed a variation of an outside line tactic to great success, keeping Marie Bayonet entangled whilst allowing their jammer to do some serious damage, pulling the scores closer at 76-54.

However, the focus of the Hinnies blockers seemed to be heightened by this scare, as they only allowed two points slip from their grasp in the following two jams, with Uberschnell and Hot Whips adding five between them. But things weren’t finished there, as, with the scores at 85-59, the fourteenth jam saw Kent really push the home team in the final few minutes remaining. With Levine Dead and Elizadeath Benhurt starting in the bin, jammer Mayjour Collision attacked with serious intent, and was given a great piece of fortune when Blackjack Belle, who had been holding the jammer off well, was barged into the path of her own jammer, Hot Whips, allowing the visitor to grab the lead and pick up a much needed 10 points to apply a great deal of pressure; 85-69.

But yet again, this sparked a revival in Hinnies blockers, with Levine Dead in particular taking on the challenge of stopping Faery Quad Mother in her tracks. The Hinnies blocker was immediately released from the bin at the start of the fifteenth jam, and wasted no time making a nuisance of herself in front of the Kent jammer. Although it was the visiting jammer who took the lead, her job was made much more difficult as Diagnosis Maul’er and Elsie Dagger were sent to the bin, leaving her in full sights of Levine Dead, who promptly hit her off the track, bringing the penultimate jam to a close, and the home team still with their lead in tact.

The final jam displayed an exercise in smart play by the home team, as with just over one minute of playing time left, and with two Kent blockers starting in the bin, the NRG defence stepped up their game one last time. Hot Whips waited for her chance and battled through the pack to take the lead, before racing to a safe distance on the opposite side of the track to her opposite, Mayjour Collision. The Kent jammer faces a seriously difficult task, first being smashed off the track by Blackjack Belle, before being held firmly in place at the rear of the pack by Elizadeath Benhurt. The Hinnies blockers ran down the time with the Kent jammer trapped amongst them, whilst Hot Whips maintained her safe distance, delighting the crown with a few cheeky tricks as the seconds ticked away.