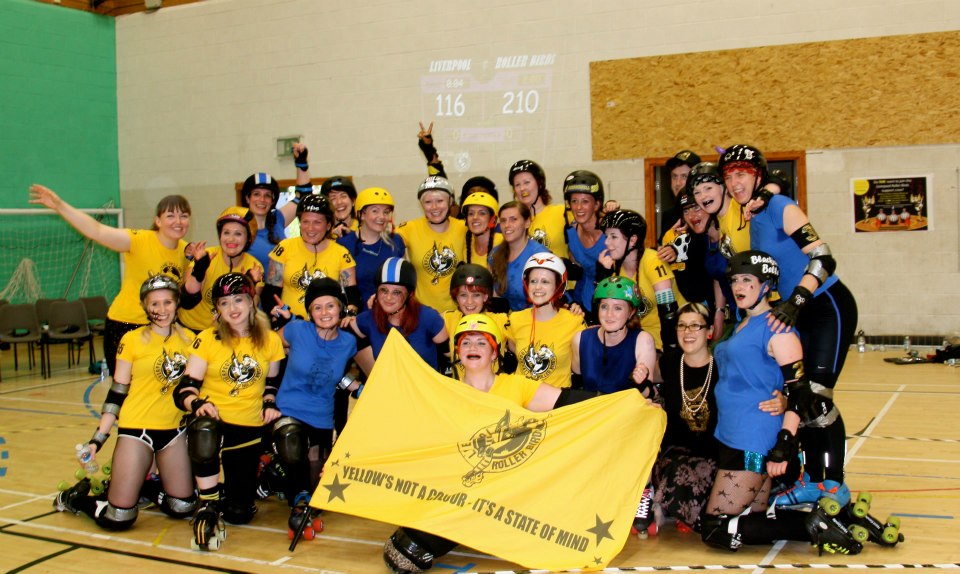 Now that the Olympic Games (and, more importantly, the Rollympic Games) have been and gone, the nation required an event of global proportions in the field of sporting excellence to steal its attention. Naturally, a late summer roller derby show down in the North West was exactly what was needed, and with that, the double header of a Liverpool hosted event was born, as the Newcastle Roller Girls paid a visit to the Liverpool Roller Birds. The first event of the afternoon saw the Liverpool Roller Chicks take on the NRG Whippin’ Hinnies. Unfortunately, news of late injuries to the hosts threatened to dampen the occasion, but with the addition of two skaters from the Preston league and a member of the Liverpool Birds stepping in, things were starting to look up for the home team. Newcastle had two injuries of their own to contend with, and so naturally, we wish all parties on both teams the speediest of recoveries. On a lighter note, NRG’s Ellie Mental made her full bouting comeback on Merseyside, having spent a long six months out of action. With all this talk of injury, many could be forgiven for expecting a disrupted performance from either side; but they would be very much mistaken.

Although we had to wait until the second jam for the action to really kick in, kick in is exactly what the it did. Within seconds of the jam starting, Liverpool jammer Mojo Gogo was sent to the bin, allowing Marie Bayonet to claim lead and burst through the pack. The Hinnies automatically assumed their effective outside line tactic, leaving their jammer to spin her way through the stretched Liverpool blockers, picking up 21 points in the process. This form continued in the following jam, with Mojo Gogo still binned, it was the turn of Uberschnell to test the home blockers. Thanks to the disrupting work of the Hinnies blockers, the jammer was able to slip through a congested pack for another 15 NRG points, whilst Mojo Gogo managed 3 of her own upon her release; 3-36.

Another burst of action followed in the fifth jam, where again the Liverpool jammer, this time Ceelo Mean was sent to the bin almost immediately. Once more, Marie Bayonet took full advantage, making a series of impressive passes, each time aided by the good work of captain La Dolce Beater, who knocked a path clear for her jammer at every opportunity; 7-56. \The sixth jam was a closer affair, however, as a series of big clashes prevented either team from claiming lead. First, Blackjack Belle did very well in holding off Mojo Gogo, and when the Liverpool jammer finally did break free, she was immediately halted by Boozewound Barbie, who was sent to the bin in the process. Simultaneously, some good work by Faye-rocious Booty prevented Uberschnell from causing damage for the majority of the jam; although when she too broke free, she made a great sweeping pass around the outside of the pack; 15-65.

Another thrilling jam came on the eighth outing, as NRG’s Hit One Purl One took the jammer panty for the first time. The Hinnies jammer impressively fought her way through three of the Liverpool blockers to take lead and 10 points, whilst two huge hits from Blackjack Belle made sure that opposition jammer Short ‘n’ Clout was trapped at the back of the pack. However, the Liverpool jammer went on the attack upon Hit One Purl One being sent to the bin, and just managed to shrug off the attentions of Boozewound Barbie to eventually claim 10 points of her own; 25-75.

But at this point a period of cageyness took over as each team realised their opponents were capable of scoring serious points. Neither team racked up more than 5 points in any of the jams during this period, and this was certainly due in part to some solid blocking from both sides. For the home team, Faye-rocious Booty and Bella B’ Flat were particularly effective in nullifying the efforts of the Newcastle jammers. For the visitors, the work of Ellie Mental, Elizadeath Benhurt, Cookey Monstrous and Angry Bird (making her bouting debut) were equally effective in reducing the outlay of points. By the seventeenth jam, the score was set at 44-98.

Things got a little more dramatic again in the eighteenth jam though, as the ongoing battle between Short ‘n’ Clout and Marie Bayonet continued. The NRG jammer held off Bella B’ Flat before grabbing lead, as blockers Boozewound Barbie, Hit One Purl One, La Dolce Beater and Cookey Monstrous caused havoc in the Liverpool ranks with a variation of their outside lining once more; 44-112. With Short ‘n’ Clout starting the next jam in the bin, NRG jammer Indijo took the ascendency, totalling a further 10 points before calling the jam off with the newly released Liverpool jammer entangled in the Hinnies blockers ranks; 44-122.

Liverpool looked to end the half on a better note, however, as Short ‘n’ Clout again took up the jamming role in the twenty-first jam. The Liverpool jammer surged into lead with Marie Bayonet thoroughly held up by some good blocking from Ceelo Mean. The revival certainly didn’t last though, as despite surviving one big Ellie Mental hit, she was knocked off the track by the NRG blocker at the second attempt, forcing her to call off the jam, ending the half.

The second half got off to an eventful, if not overly productive start, as a 6-skater pile up crashed into being within seconds of the first whistle. Through the wreckage, Liverpool jammer Kitty Von Vixen almost took lead, only to be knocked off the track courtesy of a big Boozewound Barbie hit, handing lead to Uberschnell, who duly notched up another 4 points.

Liverpool clearly meant to at least slow down the rate of points heading NRG’s way in the second half, and this was certainly evident in the third jam. Both jammers managed to make it through the pack and instead turned their focus on each other. The jammer-on-jammer battle saw Short ‘n’ Clout floored twice by Uberschnell, but never allowed the NRG skater to get too far ahead of her, ultimately forcing a low scoring jam; 48-142.

Slow progress for both teams continued for the next two jams, again thanks to some assured blocking on the part of the visitors. Ellie Mental created space for her jammer in the fourth jam, only to be sent to the bin for wiping out two opposing blockers. Then, in the fifth jam, with Elizadeath Benhurt and Cookey Monstrous the only NRG blockers left on track, Mojo Gogo was prevented from scoring any points; 50-147.

But, as is seemingly roller derby tradition, just when we thought things were getting a little bit too quiet, the game exploded back into life. Ellie Mental made an immediate return from the bin, slamming jammer Short ‘n’ Clout straight to the back of the pack. The Liverpool jammer was then unfortunate in taking a nasty fall, but low blocking in the process, and so was sent to the bin. Despite the efforts of Mint to slow Uberschnell down, the NRG jammer eventually burst beyond the blocker, and cue a fairly devastating use of the Hinnies outside line again, this time bringing a massive 30 points back to the visiting team; 50-177. But once more, the teams shored up their defences over the next four jams, with NRG adding another 5 to their total, without reply from the home team.

This sparked somewhat of a resurgence in the Liverpool Roller Chicks, and also introduced Ninja Sparrow as a jammer for the first time in the bout. A huge hit from Elizadeath Benhurt seemed to have knocked the Liverpool jammer out of the game, yet amazingly she recovered extremely quickly and even managed to take lead. She was instantly faced with the daunting task of breaking through Boozewound Barbie and Indijo, but after an initial struggle, was given a helping hand when the latter NRG blocker was binned; 62-182.

Liverpool prevented the Hinnies from registering a single point over the next three jams as they sought to pull the scoreline to a closer affair. The combined work of jammers Short ‘n’ Clout, Kitty Von Vixen and Ninja Sparrow bumped up the home total by a further 17 points in this period, with NRG only managing 2 in the following jam. However, once Liverpool reached 84 points, the visitors kicked into action again.

The eighteenth jam saw the introduction of Whippi Longstocking as jammer for the first time in the bout, and she certainly made up for lost time. The NGR jammer used Elizadeath Benhurt as a battering ram, making a path through a very tight pack, swooping her way into the lead. An enthralling battle between blockers Boozewound Barbie and Devil Mae Clare only ended up giving Whippi Longstocking more room to manoeuvre, eventually bagging herself a 24 point haul; 84-202.

Four jams later and Liverpool had a high scoring effort of their own. Although Uberschnell grabbed lead jammer, she was instantly pegged back by Devil Mae Care, allowing Ninja Sparrow to swerve brilliantly between a packed crowd of blockers, settling for 20 points before her NRG equivalent called the jam off; 106-210.

With barely any time left on the clock, the home team were looking to take back some pride, and it was Kitty Von Vixen’s turn to do just that. An extremely determined, battling performance from the Liverpool jammer saw her make a great pass as Nora Toxin held NRG jammer Cookey Monstrous. The home team ultimately managed another 10 points before the clock ran down on an extremely entertaining bout in which the Hinnies were thoroughly impressive.