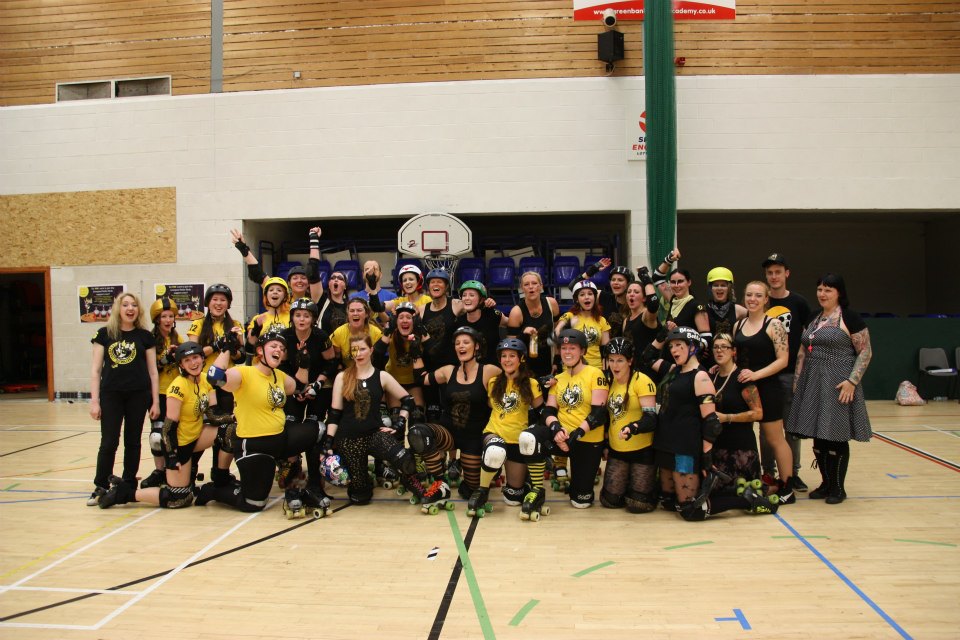 As the hosts of this double header had already played out an extremely entertaining first bout earlier in the day, now was the turn of the respective first teams to see what they could conjure up on what had so far been a very exciting day in Liverpool. Unfortunately, like the Hinnies before them, Newcastle’s Canny Belters also had some injuries to contend with, as two of the expected line-up were ruled out long before bout day, whereas regular Kalamity James took no further part than the initial skate out. Fortunately for the visitors, experienced replacements were not hard to find as Blackjack Belle and Marie Bayonet, who had both played the earlier bout were joined by fellow experienced head GG Fox. So could the second bout of the day successfully follow the first? I think you all probably know the answer to that.

We certainly did not have to wait very long for the first slice of excitement of bout number two, as the very first jam provided a phenomenal display of jamming. Belters jammer Miss Wired withstood a big hit from String’er Belle, before bursting through the pack then wiping out Liverpool jammer Little Daria Dynamite. Things got worse for the home team as their jammer was then sent to the bin, allowing Miss Wired to flourish, surviving another big hit, this time from Sissy Breakneck, as she made the most of the NRG outside lining to wrack up a brilliant 30 points, without reply.

The Belters continued their early dominance as they refused to concede a single point over the following five jams. Jammers Miss Wired and Big Smack & Fries added a slow, steady flow of 13 points over this period, but were very much helped by some solid defensive work from the NRG blockers. In particular, the efforts of Bucks Liz, Lone Danger, GG Fox and captain Brie Larceny completely shut out the opposition jammers. Liverpool did finally register in the seventh jam, as Corey Maim managed to eek out two for her team; 2-43.

A fighting spirit seemed to be instilled in the Liverpool skaters on the back of this, and in the ninth jam, Birds jammer Tinkerhell flew out of the pack early on. The jammer weaved her way magnificently through the NRG blockers and managed to register a point before things quickly turned against her. As soon as she looked in danger of grabbing a few points from the visitors, each of the Belters blockers set upon the jammer, forcing her to call it off. This triggered something of a defensive tightening from NRG, as in the following jam, Elasta Plasta, Bucks Liz and Levine Dead battered jammer Dolly Dread-Ful to the back of pack before the latter blocker sent the jammer flying off track with a huge hit. All the while, Miss Wired dancing through the Liverpool blockers to bring back another 5 points; 3-50.

The next dramatic swing of events came in the fourteenth jam, with the introduction of Gin + Sonic as the Belters jammer. The jammer survived hits from Metal Alchemist and String’er Belle before bursting through the pack for lead status. The unlucky Liverpool jammer Little Daria Dynamite was forced to endure another difficult jam as she was binned, providing NRG with another excuse to utilise their outside line to great effect, as blocker Missy Pow Pow knocked a late path through for Gin + Sonic, confusing the opposition defences, and making room for a 19 point haul; 10-70.

Liverpool responded well in the following jam though, as they were handed a powerjam situation. With Big Smack & Fries sent to the bin very early on, jammer Tinkerhell did extremely well to skip beyond the reaches of Missy Pow Pow before recovering very quickly from a huge GG Fox hit for her first successful pass. Elasta Plasta and Missy Pow Pow shored up their defences in the later stages of the jam, stopping the total at 13 points for the home team; 23-70

The following four jams saw the game slowed down by the visitors, as they prevented their opponents from registering further, whilst notching up a further 9 points of their own. However, with the twenty-second jam came another big jamming effort from the Belters, with Little Daria Dynamite being first ushered off track by Blackjack Belle before being sent to the bin, jammer Marie Bayonet took full advantage of the diminished Liverpool ranks, darting her way through the pack for another 15 points; 23-94.

With NRG blockers GG Fox and Bucks Liz starting the following jam in the bin alongside Liverpool jammer Little Daria Dynamite, the home blockers stepped up their resilience in the closing stages of the first half. Atomic Hittin, Robinson, Cub La Khan and Metal Alchemist seriously slowed jammer Gin + Sonic down, and though she did well to eventually weave her way through the crowd, she was prevented from reaching a greater total than 5. Unfortunately for the hosts, however, this resilience didn’t last as more solid Belters jamming put them to the sword once more. Miss Wired somehow shrugged off the intimidating advances of Yolanda B’ Cruel as she began a series of passes. Things were made exceptionally difficult for Little Daria Dynamite here again as she was the victim of one enormous hit from Elasta Plasta, sending her to the back of the back, before Missy Pow Pow hit her with a second, pushing the jammer right into the crowd. Blockers Jax Hell’er and Tinkerhell finally slowed Miss Wired down, but the damage had been done as half time was called.

The start of the second half was a much closer affair, however, as the home team looked to get themselves back into the contest. The first big battle came in the third jam of the half, as blocker Cub La Khan immediately sent Marie Bayonet to the floor with a huge hit, allowing her jammer Tinkerhell to break through the pack for lead, battling past Bucks Liz in the process, eventually picking up 8 points. Although NRG grabbed 5 points over the following two jams, they were held at their total of 133 for a further four jams as the hosts looked to improve. While progress was slow at first, the eighth jam finally brought something to write home about for Liverpool. An early block from String’er Belle prevented Miss Wired from making her way through the pack, with the NRG jammer ultimately being sent to the bin. As the Belters blockers looked to wall themselves across the track, jammer Jax Hell’er spectacularly managed to duck underneath the defences for a very good pass. An inside pass followed before a hard but successful battle with the blockers followed before the jam was called off, having picked up 15 points for the home side; 49-133.

Although the efforts of Corey Maim and Tinkerhell pulled the Liverpool total up by a further 8 points, that’s where they were forced to stay for eight following jams. The Belters finally moved up from 137 points in the fourteenth jam, where they seemed to be looking to close the bout. Although Miss Wired was brought down by Metal Alchemist, Liverpool jammer Corey Maim was sent to the bin at the same time, allowing the Belter to recover and snatch at 10 points for the visitors. The points gradually began to flow, as in the following jam, Gin + Sonic battled her way beyond picot Cub La Khan to win a further 9 points for the Belters; 57-156.

Gritty blocking work really was the key to the successful lack of conceding from the Belters in this period. Most noteworthy was the work of Missy Pow Pow, Marie Bayonet, Blackjack Belle, Levine Dead, Bucks Liz Brie Larceny and Elasta Plasta, who through a mix of teams simply refused to allow the Liverpool jammers to even grab lead status for seven jams, let alone register a single point. This culminated in another hefty points haul from Gin + Sonic in the eighteenth jam, as she squeezed her way through a crowded pack for a further 13 points; 57-175.

With only three-and-a-half minutes left on the clock, the points just kept rolling in for the visitors. Now in the twenty-first jam, and Miss Wired pulled out a stunning performance, somehow twisting and turning her way through the Devil Mae Clare, Metal Alchemist and Corey Maim, claiming yet another big 14 points for the Belters; 60-193. The twenty-third jam was the final one of the day, and was also quite possibly the most clustered of the second half. Elasta Plasta and Bucks Liz began the jam in the bin, but the remaining Belters blockers pulled together very well in slowing jammer Atomic Hittin down to the point that when she and NRG jammer Big Smack & Fries finally made it through a battling pack, no clear lead could be announced. Unfortunately for the hosts, Atomic Hittin, believing she was lead, attempted to call the jam off, causing her to lose serious ground on Big Smack, who then flew through the Liverpool defences for a great first pass. A collision between Brie Larceny and Atomic Hittin resulted in both being sent to the bin, which meant NRG had the chance to punish Liverpool with their outside line one last time, and that is certainly what they did; Lone Danger, Missy Pow Pow and Elasta Plasta made sure of a path for Big Smack who fought her way to a 17 point haul.

An explosive end to what was a second thrilling bout of the day. Both teams had moments of sheer brilliance, but a seemingly effortless collective mindset from the NRG skaters gave them a clear cutting edge, and they definitely gave the audience a spectacle.