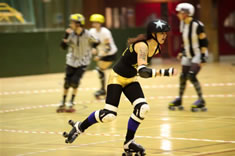 Newcastle Roller Girls’ first ever home bout vs Northern United Team Skaters (with members from Middlesbrough Milk Rollers, Liverpool Roller Birds and Manchester Roller Derby) saw the Canny Belters pick up their second consecutive win with a final score of NRG 102 – NUTS 81. Although it was a closed bout the atmosphere was electric and the stakes still as high as ever.

NUTS were off to a great start as fans screamed from the balcony, and the half time score was 43-49 with NUTS in the lead.

The second half was ours though, with some awesome power jams seeing NRG skate out in front and take first place.

This was a particularly special win for NRG as it was the first time we have fielded a team of entirely our own players – we do love our guests, but it made the victory even sweeter. Our awesome GG Fox took home the bout’s MVP certificate for her amazing jamming skills, and for NUTS it went to MMR’s Oompah Thump-Ya!

By Big Smack and Fries