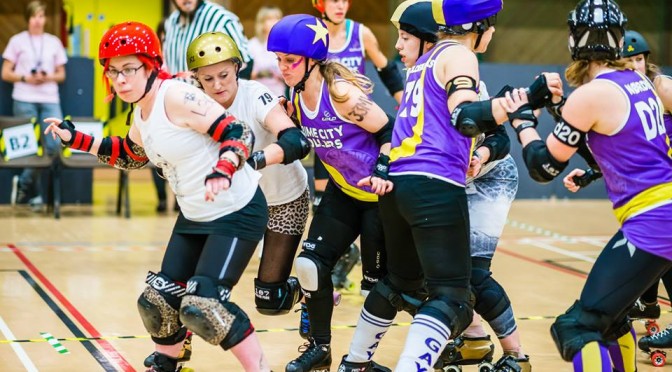 The Whippin’ Hinnies saw out a very successful 2014, which saw them win 13 out of their 15 games and take a significant rankings jump, taking both wins at their mini tournament on Saturday 1st November at the Walker Activity Dome.

The Hinnies played against the Sheffield Steel Roller Girls All Stars and Crime City Rollers B team from Malmo in Sweden.

It was a tough three way tournament, with two teams having to play two full length games back to back.

First up both of our guests played, Sheffield Steel against Crime City. It was a hard hitting, physical game, but the Swedes impressive physique and athleticism saw them take the win 235-100.

Next up was home team NRG’s Whippin’ Hinnies to take on Crime City, and the Hinnies really felt the physicality of their opponents in this one.

Number 88 Kalamity James was skating and said: “I think we were all a little intimidated at first by the Crime City skaters, watching them warm up, they looked very impressive with some great footwork and they were all about two feet taller than us! It was such a hard hitting game, very physical, we lost one of our jammers Amy T Ville Horror part way through the game due to injury as well. But I think our walls stuck together well and some great two on two walls saw us win 252-162.”

Next up were Sheffield Steel, who actually played Newcastle Roller Girls A team last November, but after some line up losses, a slide in the rankings saw them as a good match for the Hinnies in this tournament.

Kalamity said: “This was probably the hardest game of roller derby I’ve ever played in my life and I was only blocking, I don’t know how our jammers did it, absolute heroes! It was exhausting playing two bouts back to back, and we really felt that acutely at half time. Again it was another really physical game, lots of big hits, and the loss of one of Sheffield’s skaters She Rarr due to a neck injury scare, was another indicator of that. With lots of smart recycling though we won our second and final game of the day 237-133.”

Kalamity added: “These were two really really great teams to play against. I’ve played against Sheffield lots and they’re such a nice bunch of girls. It was also great to make some new friends in Crime City, it was very sporting play, helping the other team up post jams, apologising when things got a bit argy bargy, all the teams choosing to do the hand slaps together, roller derby at it’s finest.”

Both teams stayed for the Halloween themed afterparty as well, and watched London Roller Girls battle it out against VDRL for a shot at third place.