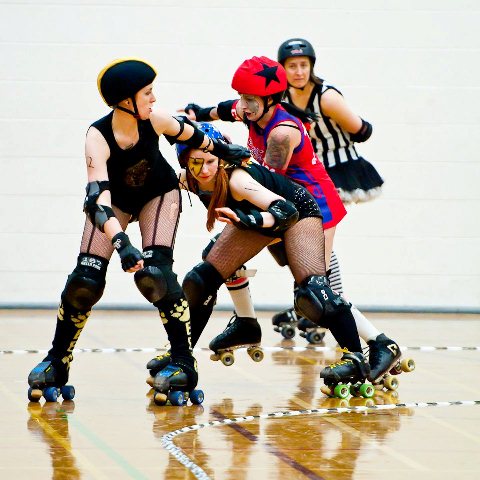 NRG came home without the win on 11th February, from their very exciting first bout of 2012 against Nottingham’s Hellfire Harlots.

It was the most tactical game Newcastle have ever played and really shows how much the standard of play in the UK is picking up. NRG captain Brie Larceny said: “It was a really tough game, the Harlots have some great players, and we always knew it was going to be a tough line up. We’ve played the same teams as them in the past and had similar scores from those games so we expected it to be close.Of course we’re disappointed that we didn’t win but we have learnt so much from playing them and are looking forward now to our first home game of 2012 Daylight Slayings!”

After closing the points differential to within 15 at the start of the second half, a lot of official time outs and successive lead jammer calls to the Harlots meant that Newcastle lost 162-95.

You can check out the pics with all the action here

And even this super amazing video too, all by Graeme Wharton!